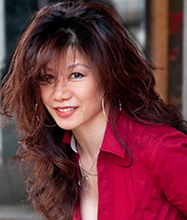 Currently working on two(2) logo identities for a private client, MK. New brands: “Love The Human” and “My Little Humans”.

Recent finish on the branding recreation of “Curl” art for Eva Scrivo Salon in b&w and color.

Sole Illustrator for StyleLingua, a quality and sophisticated styling service for professionals to launch in late-Summer, 2019!

Illustrated numerous illustrations for EDELMAN and CREATIVE CIRCLE for TRESemmé at the NYFW 2017 & 2018 and for LOVE, BEAUTY & PLANET for their event 2018.

Created over fourteen(14) new and re-design tofu labels for KONG KEE FOOD with her assistant.

Artist at MON PURSE for customized paintings for their fine-leather goods, 2017. An international company based in Australia.

A two-day ideation session for a major pharmaceutical company.

Live-drawing for GUESS/MARCIANO on location, July 2016.

Created a series of illustrations for UNILEVER GLOBAL’s launch of the first NEXXUS SALON Hair Care.

A special oil-paint portrait, “Mother and Son” originally commissioned by Dr. Leong Ying was chosen for the cover of Dr. Ying’s new memoir “From Newton, Einstein to GOD”, published in 2015. The book is WINNER of the 2015 Next Generation Indie Book Awards in the Memoirs category.

One of seven distinguished panel speakers and one of fifteen noted illustrators for the successful “One World Different Strokes” exhibition at the Taipei Economics and Cultural offices, May 2015.

Illustration for “Metropolicks”, a new romance and dating novel by co-authors Felicia Lin and Victor Scott Rodriguez, launched in 2015 with great success in social media! Asked by the co-authors to partake in the video-marketing and promotion for Hong Kong as part of their Asia Promotion Campaign.

Sketched at the Creative Brainstorm Meeting at UNILEVER (N.J.).

One of the portrait artists for MICROSOFT’s launch of WINDOWS 8 FRESH PAINT at NBC’s broadcast of the Presidential Election 2012.

Completed ninety-eight(98) illustrations and drawings for Celebrity Stylist, EVA SCRIVO for her high-profile book “Eva Scrivo on Beauty” published by Atria/ Simon & Schuster. Its digital version is the WINNER of DBW’s Enhanced Ebook.

Six(6) illustrations were chosen by Martin Dawber for their 1st coffee-table sized book, “BIG BOOK OF FASHION ILLUSTRATION” in 2008.

Featured and highlighted in Marymount Manhattan College’s “ALUMNI MAGAZINE” in 2008.

Interviewed by eLIFE Magazine for their featured article & podcast on “BRANDING ART & ELEGANCE” in 2007.

Featured in the Fashion Institute of Technology’s annual “LOOK BOOK”, the alumni segment of this view book of the college’s past, present and future. Additionally, for F.I.T.’s Annual Recruiting Campaign and newsletters.

One of the twelve(12) artists for the NUbreed event, a salute to the synergy of the arts at LINCOLN CENTER in 1996.

Donating two(2) artworks for KLYSTAR’s charity art auction for World Peace Organization on Oct. 12, 2015. Art auction will be filmed by producer and director, Richard S. Kaufman as inclusion for a documentary.

“NUbreed” – A salute to the synergy of the arts at Lincoln Center. Painting:”Gucci”, 1996

Fashion Institute of Technology’s annual “Look Book”- Featured in the Alumni segment of this view book of the college’s past, present and future. Also featured in the Annual Recruiting Campaign and newsletters